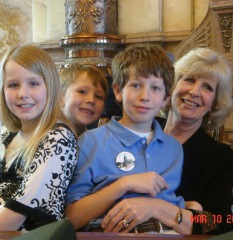 Peggy spent 10 years in Saudi Arabia with her husband, Tom, who was working for Mobil Oil Corporation in a joint refinery venture with the Saudis.  They lived in Yanbu, a red sea city with large shipping ports.  During these 10 years, losing her freedom of western dress, speech, religion, driving and actually, the freedom of being an individual, Peggy became an advocate of freedom and being an American.

Coming home in 1994, she became active and involved once again in government.  Especially in State Government, where years before she had been a campaign manager for State Representative, Kenneth King of the 77th distict of Kansas.  Peggy had been successful in helping Kenneth being elected to the Kansas House.

In 1996, Kenneth King decided to retire and not make another run for the Kansas House. He ask Peggy to run for his replacement and gave her his promotion and endorsement. This was Peggy's first election which she won hands down!   She would run 3 more times for State Representative without a lose and in 2004 made a run for the Kansas Senate and beat a 12 year incumbent.  She only served one term in the Senate, being her choice.

She was selected in 2010 to fill a half of term left for Randy Waldorf, a county commissioner leaving the area for another job.  After the two year fill-in, she ran for the commission un-opposed.

**Elected to the Kansas House of Representatives --1996

**Founder and first President of KLEAR

2010 - Selected to fill-out term of Commissioner of 2nd District with 2 years remaining in term.

Featured in Governing magazine with Pastor Joe Wright for being a major player in passing the Marriage Amendment.

Peggy Palmer made national news and magazine in 2004 fighting for the passage of the Marraige Amendment.  Pictured below with pastor Joe Wright in Govering Magazine. 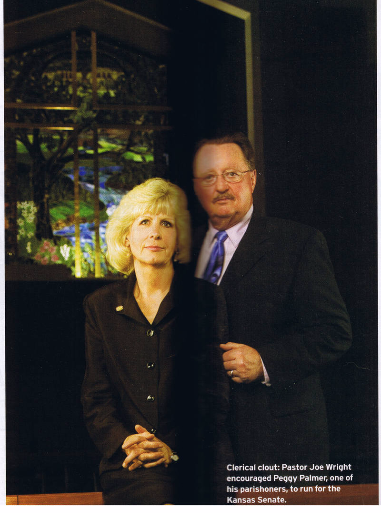